Being Neighborly: Reflecting on Mister Rogers' Neighborhood in These Times

It's been a very long time since I wrote a blog post.  So many things have happened since my last post including the sudden passing of my dad.  What better way to return to this type of reflexive writing by writing on one of my favorite shows from childhood and its subsequent documentary. 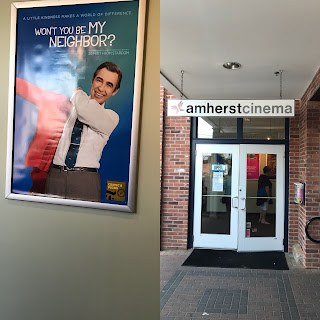 Following a longstanding tradition that I created for myself years ago, I went to see a film at Amherst Cinema on Independence Day.  Seeing the documentary Won't You Be My Neighbor did my heart and soul some good on a very rough holiday.  I've always struggled celebrating the Fourth of
July due to my racial identity and also being so far from "home" where my family barbecued every year up until recently, of course.  Since living in Western Massachusetts, with the exception of my first year in the area, and one year going to see the fireworks in Boston, I've "celebrated" Independence Day by going to the movies alone.  One of my favorite outings was when I saw Away We Go for the first time.  Not anticipating the film's ending, I cried (literally) walking down the streets of the center of Amherst until I gathered the courage to find a place to have lunch.  Wiping away tears as I browsed through the menu of one of the few restaurants open that day, I used that time to self-reflect on what the day could mean for me and how to best use my time along.  Being the overthinker I am, the day became time for me to journal and enjoy the best date I've ever been on - spending time by myself.  I've become more of an introvert wanting to spend time alone as I've gotten older.  Not necessarily because of my personality, as I love to socialize, but more so as protective armor.  People tend to be nastier these days.  Some people say that the current political climate has permitted those who've heard back for decades to say what's truly on their minds.  Sometimes, just like the past few days, it's the very hot and humid weather causing everyone discomfort and their actions towards others to follow suit.

This brings to me my experience watching Won't You Be My Neighbor (for the second time actually since I also went opening weekend- BTW, please support films opening weekend as those ticket sales do determine how long a movie will stay in theatres) and all of the thoughts going through my head.  Though I'll be referencing the film, I promise that they'll be no spoilers here.  For many of you who are fans of Fred Rogers, none of what I'm about to mention should be new news.  I took the title phrase and actually asked myself "won't you be my neighbor," of course, referencing myself.  Am I a good "neighbor"? Would people want to live near me?

Fred Rogers, affectionately known as Mister Rogers, knew how to soothe people, especially children, at times of need.  The film recalls episodes of Mister Rogers' Neighborhood and it's subsequent themes during the Vietnam War, Robert Kennedy's assassination, and a special that was taped post-9/11.  These episodes were really good at staging similar situations in the Land of Make Believe (i.e., King Friday XIII wanting to build a wall to keep danger out of the kingdom) and the younger characters (many times that being Daniel Tiger) talking with adults to work out their emotions and rationalize what was happening in the world around them.  Through the safety of projecting and the magic of television, viewers were able to work out emotions and feelings without having to experience situations first hand.  Through the intersections of representation, subjectivity and spectatorship, television has the power to empower those who need to feel a part of a community.  I know for myself, Mr. Rogers made me feel like I and my feelings mattered.

How could I be more like Mr. Rogers?  How could we all be like Mr. Rogers?  Is a simple "hello" to a complete stranger as you pass one another in the grocery store enough?  Is holding the door for the person behind you as you each attempt to enter a coffeeshop in the morning, getting that necessary brew to start your day enough?  Is following traffic laws and actually following all of the rules that you've learned in drivers' education instead of intentionally speeding and cutting off other drivers enough? Is a smile to people as you pass one another walking down the street enough?  I know for myself, having these small things done to me make me feel important - putting me on the top of the world for the day, not just that brief moment.  Why.....because I mattered to someone.

I haven't lived in a true "neighborhood," well one by Fred Rogers' definition, since I was a teenager in Detroit.  The children who attended the same school participated in a carpool with parents and grandparents alternating days of when they'd drive the brood early in the morning and pick them up following band practice and sporting events.  My mom or dad could knock on any neighbors' door to ask for a cup of sugar or even to watch me while I played outside late into the evening.  We also didn't have to worry about intruders such as home burglaries and potential car thefts as we looked out for one another - visitors took notice of those of us on the porch as they search for things to take.  Luckily, none of this happened in this neighborhood.  Every time I go back to visit this neighborhood, my next door neighbors would tell fond stories of watching my parents attempt to teach me how to ride a bike (even in my late 30s, I still don't know how to), play with friends from across the street or even play by myself as being an only child for a long time (as my brother didn't come along until I was 14 years old), I had a clan of invisible playmates.  What's funny yet special about all of this is that despite the Motor City having a "not so good" reputation today, I hold my hometown close to my heart as many others thought to take care of me and look out for my well-being.  I am definitely proof that it "does take a village to raise a child" as I wouldn't be who I am today if not this many people cared for me.

Fast forward to my brief return back "home" to attend graduate school.  I lived in what was then the Cass Corridor, now heavily gentrified "Midtown" (FYI, I will never call it that).  I lived in this area from 2004-2007, still a prime time for heavy car thefts on Wayne State University's campus (where I earned my MFA), home invasions and random people being held up at gun point.  My apartment was broken into during the Thanksgiving weekend of 2004.  Days after the discovery and reporting it to the police, two of my neighbors approached me and said that while they heard and saw suspicious activity, they didn't feel compelled to say or do anything because they didn't want anything to happen to them.  I'm not going to lie:  this wouldn't have happened in my old neighborhood.

There's no need for me to go into what my experience has been like living in Western Massachusetts for the past ten years as I've spent several previous posts going into how what has happened has changed my perspective of progressive, college towns and regions.  What I can say is that now I believe that there's many more factors to consider as to why it's hard to feel and be "neighborly" in this area including the prestige and privilege that comes with the intellectualism associated with these types of places and also living so far from our neighbors being in a rural area and homes not being so close to one another.

Mister Rogers' Neighborhood also holds a special place in my heart because it's one of the few things that my parents and I shared and also something that I share with today's young people.  This show is one of the few that aired over a span of decades.  My parents were around 10 years old when the first episode aired in 1968 and when I was a child, new episodes were still being produced.  And, I got to see many of the episodes my parents watched in syndication as well.  And while I'm unsure if Mister Rogers' Neighborhood is still available in syndication, children today can experience Fred's brilliance through the animated series, Daniel Tiger's Neighborhood, which I didn't realize was a thing until I stumbled upon this article in the Huffington Post after doing my usual Google research upon watching the documentary.  Daniel, of course, is based on the puppet from the initial Mister Rogers' Neighborhood television series, and the show is set in the Land of Make Believe.  And, I must say, watching the theme song brought tears to my eyes as the show has identified an important piece of nostalgia from the formative years of multiple generations.

The theme song to the animated series, Daniel Tiger's Neighborhood.

Considering all that we have going on in society that makes us question our own humanity, please take some time to go see the documentary, Won't You Be My Neighbor.  I hope that you connect with it in the same ways that I have:  asking yourself how can I be a better "neighbor".  To find a screening near you, visit the website for the film.
Posted by Nicole M. Young at 6:23 PM No comments: