A Moment of Self-Reassurance: Cultural Affirmation and the Movie-Going Experience 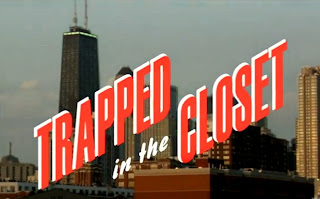 I never would have thought that attending a screening of R. Kelly's hiphopera Trapped in the Closet, along with sing-a-longs to some of his favorite hits and the film itself, and experiencing all of this in an independent art house in the Five College/Western Massachusetts/Pioneer Valley region (wow, I didn't realize that this area had so many names for it....talk about identity politics.  No wonder why living in this region comes with so many challenges) would be synonymous with affirming culture.

This past Friday, I accompanied several of my closest friends to a late night showing of the first 22 chapters of R. Kelly's project.  Though apprehensive from the moment that I found out that Amherst Cinema was going to be screening this, I had a great time!  Yes, I still find the stock characters, heightened stereotypes, and how tropes are confronted in this endeavor are problematic.  However, it was one of the first times that I felt as if I could enjoy myself in a public place in the "valley."

The experience was filled with everything you typically wouldn't find happening in a theatre like Amherst Cinema, I think, anywhere in the country whether its in the city or the country (region does play an important role in participating in a live entertainment experience).  There are norms and implied rules that are to be followed when you attend a film at Amherst Cinema or any art house in the country.  Cell phones are to be turned off, talking with your neighbor is prohibited, and everyone must stay in their self-selected seat for the duration of the movie with the exception of answering the occasional (and sometimes disruptive - for both you and other audience members) call of nature.  All of these rules went out the window that night!  We were asked to dance to the three music videos that were played prior to the feature of the evening, cell phones were out for the duration of the screening with people either taking photos of themselves and others dancing and singing the familiar lyrics or capturing footage from the film, and there was talking among groups of people during the film either serving a forecast of the outcome of the various plot lines or yelling at the screen, communicating the distaste for a choice made by one of the characters.  A regular at Amherst Cinema, it felt so nice to be able to really enjoy the film and the experience rather than worry about whether or not my neighbor is policing my friends and I to ensure that we don't ruin the movie for them.

I've been very outspoken since Trapped in the Closet premiered in 2005 about how problematic it is.  I'm going to admit that I'm a little bit of a bigot because guess what, I am proud to say that I've seen all 22 chapters multiple times (watching it got me through time that I was trapped at home - pun intended - with a severe injury that kept me off of my feet for months).  As a scholar and critic, I can talk to the cows come home and pigs fly about what this project does to amplify stereotypes rather than challenge them.  But, the spectator in me found Trapped in the Closet to be extremely entertaining for the fact that, despite the problematic stereotypes and tropes, I was able to relate to many of the characters and their experiences given that (though heightened) I know someone who recently got out of prison, have had numerous nosy neighbors, engage in gossip about the town harlot every once in a while, and have encouraged someone to follow the call when the doors of the church opened.

R. Kelly was on to something when he created Trapped in the Closet.  Who would have known that watching it at Amherst Cinema while in the company of mostly undergraduate students from Amherst College who identify as people of color would reaffirm that my experience in the body I embody is valid, even if the representations are troublesome?!  This experience provided me with the comfort and relief that I needed after an extremely stressful week and reassured me that I really need to be around "my people" every once in a while.

I'd like to swallow my pride and words utter many weeks ago that Trapped in the Closet has not earned the status of being labelled a "masterpiece" and cultural phenom.  Hell, South Park parodied it in an episode several seasons ago.  Didn't I declare that once Sesame Street or South Park has parodied you that you've marked your importance in U.S. Culture?  Congratulations, R. Kelly!  You have and will continue to rise beyond your "piss on you" days.  Continue on and prosper.  Now, onto seeing what awaits us in the next 11 chapters of Trapped in the Closet.
Posted by Nicole M. Young at 2:10 PM No comments: