Dear White People: The Lil' Movie That Did (The Most)! 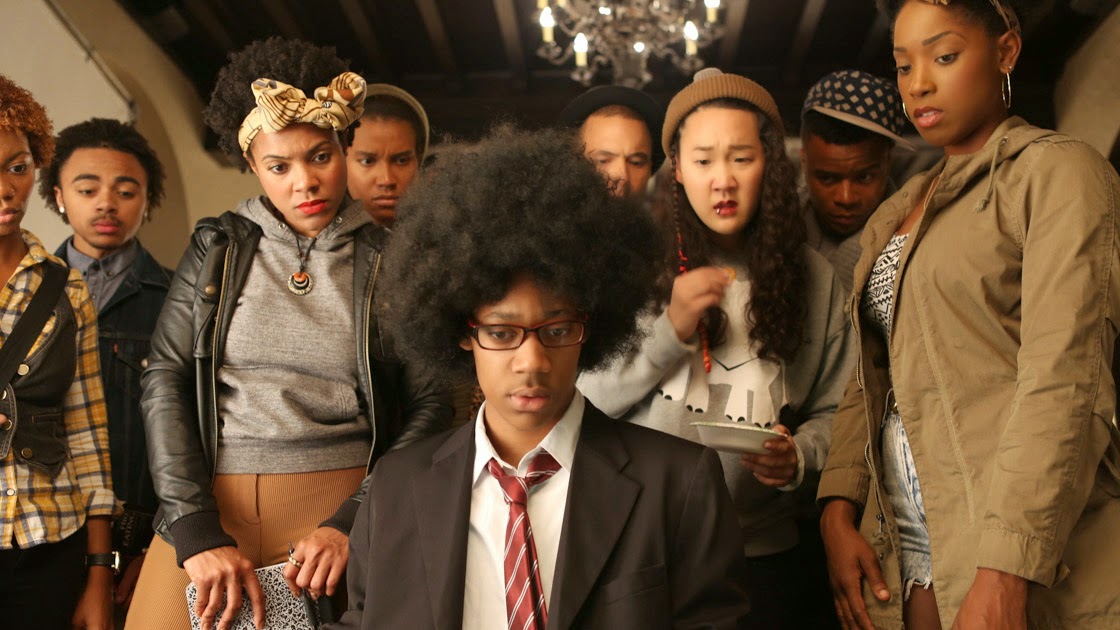 As an armchair film critic, I owe it to myself and to my audience to share some insight on my reaction and response to the recently released film, Dear White People.  After seeing it opening weekend (twice), I wasn't sure what new perspective I would be able to offer on the film, especially given the numerous reviews it's received (both prior and after the screenings I attended). Overcoming this apprehensive fairly quickly, I now feel compelled to say something.

In one weekend, I saw Dear White People along with the animated feature-length film, The Book of Life (which played at the larger, mainstream theatre in the area).  Dear White People opened nation wide on October 24.  The Book of Life opened in theatres on October 17.  I saw Dear White People on October 25 while seeing The Book of Life on October 26.  I had to travel some distance in order to see The Book of Life because the theatre nearby was only showing it four times that weekend:  two in 3D and two in standard digital, and I wasn't available to see it during any of those times. BTW, I want to note that the theatre I ended up seeing it at was only playing it five times that day (3 in XD3D and twice in standard digital).  Given what I intend to spend on a ticket and my desired experience, I didn't necessarily need to see it in 3D/XD/40DD/hydrogradeD/lowfat soy, slight foam (added my own emphasis).  So, I went to the next theatre several towns over, try about a 30-45 minute drive and a highway, to see The Book of Life.  What surprised me was the lack of screenings for a film that just recently opened (please note that Dear White People has been open now around the same amount of time that The Book of Life was open when I saw it and according to the local art house's website playing Dear White People currently, there's about seven screenings Saturday, six yesterday, and five this evening - a Monday no less).  Usually, films do not play for very long at our local art house, with the exception of Twelve Years a Slave (which I still, to this day, refuse to see, but for different reasons than one would imagine), a film that felt like it played for an eternity.  I have a sense that Dear White People will follow suit.  Readership, can you sense the anger that has fallen upon this soul when discovering this disparity?!

Reminiscing on viewing these two films brings me back to the experience of the adventure taken in order to see Gabriel Iglesias' The Fluffy Movies, which was released this summer.  The nearest theatre playing it was in Providence, RI, which is about a two hour drive from where I currently reside.  And, this was during opening weekend, no less!  And, when I went to search for other theatres playing this film, the list was extremely slim.  Not sure why, but multiple factors came to mind:  one of them being how Iglesias, as a comedian has been billed/marketed.  It felt like The Fluffy Movie played not just in metropolitan markets, but those with a substantial number of Latino/Hispanic communities. For those who are familiar with his work, how many times have you heard him talk about the advantages/disadvantages of being billed as a Mexican comedian?!  Case, in point.  Not to ruin both The Book of Life and The Fluffy Movie, because I really want people to see these films, making the trek for these movies was well worth it, more so than seeing Dear White People twice at a theatre within walking distance from my house.

A trailer for The Fluffy Movie:  Unity Through Laughter (2014)

I've wanted an excuse to write about The Book of Life and The Fluffy Movie, even if it's just a brief mention.  Thanks to Dear White People and understanding a little bit about the film distribution industry, I'm able to comment on each of these films within the same blog post!  These films have multiple similarities, some obvious (films featuring artists/filmmakers/writers/performers of color) and some that only intersect once I interject in the discourses being produced (or lack thereof) as a result of the existence of these specific cultural products.

Though I'm still torn about how I feel about the film, I believe that Dear White People as a cultural product is extremely important.  A film with a small budget, one that had to be garnered via an Indiegogo.com campaign as recent as 2012, I would like to applaud Justin Simien for accomplishing something that most independent films don't experience- a wide audience across the country for their inaugural feature-length endeavor, especially one that attempts to tackle so many "isms" in less than two hours.  I am especially impressed that this type of film made it's way to art houses such as Amherst Cinema (the theatre where I saw the film initially).  These types of movie theatres garner a very particular audience, as was demonstrated the very evening that I went to see the film a second time.  There was a famous German filmmaker in the house for a special screening and Q&A about one of his projects.  This was the first time that I saw a line out of the door at Amherst Cinema!  It was actually encouraging.  The typical audience made up the line for this screening, older white retirees, college/university professors, and students who probably needed to see the film for class/extra credit (the crowd that I saw was like 100% white... not kidding; not the type of audience that I would expect for a film like Dear White People).  I just had to share this information prior to going into my full analysis on my viewing experience this time around.

Despite however I feel about the film, I encourage everyone to go see Dear White People.  It's an interesting conversation starter, as dialogues that wouldn't be held otherwise proceeded both times I saw it.  I also want others to support this filmmaker as I think he has strong potential as a producer (I will explain more about this in the coming moments).  Not only do I want this film to make its money back in box office ticket sales, I really want to encourage this filmmaker to continue pursuing a career in the industry.

I will not offer a typical critique of the film, one riddled with spoilers or even whether or not I liked the film, because I'm still torn as to how I want to rate the film.  Instead, I will give you items to consider when watching this film.  With so much to say on this film, I've decided to write my thoughts concisely as bullet points:

Because others have put some of my thoughts succinctly, here are links to some of my favorite critiques/articles on the film:

I hope that my post encourages further dialogue about this film and the issues raised in this film.  I hope that it also encourages others to consider the importance of being an informed spectator/audience member for film, television, radio, theatre, print media, etc.  Thank you for reading and please, pull as many people as possible to see Dear White People.  Continue talking and maybe one day, marginalized people can be rendered differently in mainstream media and artists of color can challenge the perceptions of the obligation to only show what's wrong and avoiding the possible.